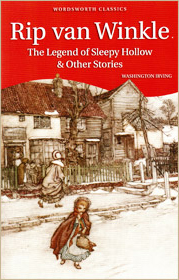 Rip van Winkle is an amiable man whose home and farm suffer from his lazy neglect; a familiar figure about the village, he is loved by all except his wife. One autumn day he escapes her nagging to wander up into the mountains, and there after drinking some liquor offered to him by a band of very strange folk, he settles down under a shady tree and falls asleep. He wakes up twenty years later and returns to his village to find that not only is his wife dead but war and revolution have changed many things. He, on the other hand, although older is not appreciably wiser and soon slips back into his idle habits. Three equally compelling stories, "The Spectre Bridegroom", "The Pride of the Village" and "Mountjoy", complete this collection of classic tales from the inspired pen of Washington Irving, one of America's greatest writers.