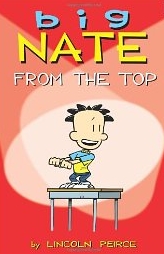 Big Nate, a.k.a. middle schooler Nate Wright, is eleven years old, four-and-a-half feet tall, and the wunderkind creation of cartoonist Lincoln Peirce. Nate is also the star of six novelized books to be published by HarperCollins, the first of which debuted on the New York Times children's best-seller list. This Big Nate Collection collects Peirce's Big Nate strips, originally published only in newspapers.


For those not familiar with Big Nate, think Diary of a Wimpy Kid meets Calvin and Hobbes. Nate is a self-described genius and a sixth-grade Renaissance man equipped with only a #2 pencil and the unshakable belief that he is destined for greatness (a fortune cookie told him so). He fights a daily battle against overzealous teachers, undercooked cafeteria food, and all-around conventionality. He's the original rebel without a clue, alternately abrasive and endearing to classmates and teachers alike. Throughout Peirce's Big Nate Collection, Nate blazes an unforgettable trail through the sixth grade at P.S. 38, earning straight As in laughs (and numerous detentions) along the way.

Cartoonist Lincoln Peirce was born in Ames, Iowa, but grew up in Durham, New Hampshire. As a kid, he began creating his own strips in the sixth grade, just like his beloved character Nate Wright. Peirce taught high school in New York City and has created several animated pilots for the Cartoon Network and Nickelodeon. He lives in Portland, Maine, with his family.