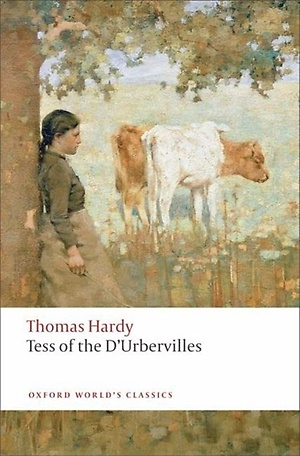 PHASE THE FIRST THE MAIDEN

On an evening in the latter part of May a middle-aged man was walking homeward from Shaston to the village of Marlott, in the adjoining Vale of Blakemore or Blackmoor. The pair of legs that carried him were rickety, and there was a bias in his gait which inclined him somewhat to the left of a straight line. He occasionally gave a smart nod, as if in confirmation of some opinion, though he was not thinking of anything in particular. An empty egg-basket was slung upon his arm, the nap of his hat was ruffled, a patch being quite worn away at its brim where his thumb came in taking it off. Presently he was met by an elderly parson astride on a gray mare, who, as he rode, hummed a wandering tune.

"Good night t'ee," said the man with the basket.

The pedestrian, after another pace or two, halted, and turned round.

"Now, sir, begging your pardon; we met last market-day on this road about this time, and I zaid 'Good night,' and you made reply 'Good night, Sir John,' as now."

"Then what might your meaning be in calling me 'Sir John' these different times, when I be plain Jack Durbeyfield, the haggler?"

The parson rode a step or two nearer.

"It was only my whim," he said; and, after a moment's hesitation: "It was on account of a discovery I made some little time ago, whilst I was hunting up pedigrees for the new county history. I am Parson Tringham, the antiquary, of Stagfoot Lane. Don't you really know, Durbeyfield, that yourgyman explained that, as far as he was aware, it had quite died out of knowledge, and could hardly be said to be known at all. His own investigations had begun on a day in the preceding spring when, having been engaged in tracing the vicissitudes of the d'Urberville family, he had observed Durbeyfield's name on his waggon, and had thereupon been led to make inquiries about his father and grandfather till he had no doubt on the subject.

"At first I resolved not to disturb you with such a useless piece of information," said he. "However, our impulses are too strong for our judgment sometimes. I thought you might perhaps know something of it all the while."

"Well, I have heard once or twice, 'tis true, that my family had seen better days afore they came to Blackmoor. But I took no notice o't, thinking it to mean that we had once kept two horses where we now keep only one. I've got a wold silver spoon, and a wold graven seal at home, too; but, Lord, what's a spoon and seal?...And to think that I and these noble d'Urbervilles were one flesh all the time. 'Twas said that my gr't-grandfer had secrets, and didn't care to talk of where he came from...And where do we raise our smoke, now, parson, if I may make so bold; I mean, where do we d'Urbervilles live?"

"You don't live anywhere. You are extinct -- as a county family."

"Yes -- what the mendacious family chronicles call extinct in the male line -- that is, gone down -- gone under."

"At Kingsbere-sub-Greenhill: rows and rows of you in your vaults, with your effigies under Purbeck-marble canopies."

"And where be our family mansions and estates?"

"And shall we ever come into our own again?"

"And what had I better do about it, sir?" asked Durbeyfield, after a pause.
펼쳐보기

Young Tess Durbeyfield attempts to restore her family's fortunes by claiming their connection with the aristocratic d'Urbervilles. But Alec d'Urberville is a rich wastrel who seduces her and makes her life miserable. When Tess meets Angel Clare, she is offered true love and happiness, but her past catches up with her and she faces an agonizing moral choice. Hardy's indictment of society's double standards, and his depiction of Tess as "a pure woman," caused controversy in his day and has held the imagination of readers ever since. Hardy thought it his finest novel, and Tess the most deeply felt character he ever created. This unique critical text is taken from the authoritative Clarendon edition, which is based on the manuscript collated with all Hardy's subsequent revisions.