The Jordan Rules : The Inside Story of One Turbulent Season with Michael Jordan and the C[文庫(문고)] 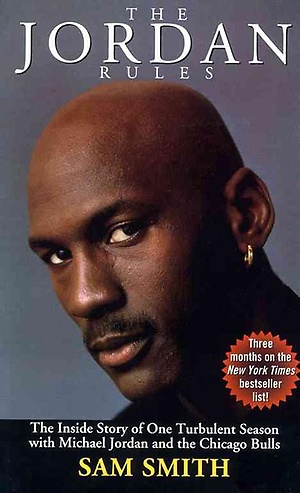 "The Jordan Rules ... might be the best sports book since Season on the Brink about Bob Knight."
? Chicago Sun-Times

"Jordan boasts a wicked tongue, and not just when it's hanging out as he dunks ... [He] manages to blurt out enough in Smith's book to reveal his own narcis­sistic, trash-talking, obsessively competitive side."
? Newsweek

"The Jordan Rules entertains throughout, but the most fun comes from just hanging out with the players. Smith takes us into the locker room, aboard the team plane and team bus, and seats us on the bench during games. Sometimes, books reflecting on a team's success don't reach the personal level with the people who made it happen: The Jordan Rules does."
? Associated Press

"A riveting account ... what you want in a sports book: the behind-the-scenes stuff, a peek at the private side of the players, their hobbies and politics and religion, the way they get along or don't ... It's fair to compare The Jordan Rules with the campaign books that appear after every presidential race ... The difference is not only that The Jordan Rules explains more persuasively than most of the campaign chronicles how the winner was decided?it's that it does so more interestingly and with more understand­ing of the human heart."
? Fred Barnes, The American Spectator

This is the book that changed the way the world viewed Michael Jordan, while delivering nonstop excitement, tension, and thrills.

The Jordan Rules chronicles the season that changed everything for Michael Jordan and the Chicago Bulls. After losing in the playoffs to the “Bad Boys” Detroit Pistons for three consecutive years, the Bulls finally broke through and swept the Pistons in the 1991 Eastern Conference Finals, on the way to their first NBA championship.

Celebrated sportswriter Sam Smith was there for the entire ride. He reveals a candid and provocative picture of Michael Jordan during the season in which his legacy began to be defined, and seeks to figure out what drove him. The Jordan Rules covers everything from his stormy relationships with his coaches and teammates and power struggles with management-including verbal attacks on general manager Jerry Krause and tantrums against coach Phil Jackson-to Jordan’s obsessions with becoming the leading scorer, and his refusal to pass the ball in the crucial minutes of big games. Jordan’s teammates also tell their side of the story, from Scottie Pippen, to Horace Grant, to Bill Cartwright. And Phil Jackson-the former flower child who blossomed into one of the NBA’s top motivators and finally found a way to coax Jordan and the Bulls to their first title-is studied up close.

“Smith takes us into the locker room, aboard the team plane and team bus, and seats us on the bench during games. Sometimes, books reflecting on a team’s success don’t reach the personal level with the people who made it happen: The Jordan Rules does” (Associated Press).

Discover the team behind the man, and the man behind the living legend, in this intense, fascinating inside story of the incomparable Michael Jordan.